This One Chart Proves the Grexit is desirable, and inevitable

Saturday 9th May, or as I've been calling it, G-Day (Grexit Day) has come and gone, without Churchill's desired invasion of Greece, with the idea of flanking Germany while also limiting the spread of Soviet control across eastern Europe.

No. Wait. I'm getting things mixed up here. Let me start over...

Now, I wouldn't want you to think that I'm actually comparing the Eurozone to the German occupation of Europe during the Second World War. There is no comparison. One brought pain and suffering across a continent, destroyed peoples, economies, culture, cities, indeed entire countries. And no, don't wait for the punch line - and then there was WWII. The fact is that the European Union with open borders and flow of people and capital has helped to lift millions out of poverty while also ensuring peace across (most of) the continent for over 50 years.

It is just a little humorous however to notice that the pre-D-Day map of Occupied Europe does bear a striking resemblance to a present day map of Euro Europe.

Saturday 9th May, or as I've been calling it, G-Day, has come and gone without the invasion of Europe by the New Drachma. Having predicted May 9 as the day, I now say "I was wrong ... about the date." Yet the conditions for a Greek Exit from the Euro are as strong today as they ever were, and getting stronger by the day. In my previous post predicting May 9 as G-Day, I listed six reasons why Grexit is inevitable. The passing of the 9th without a Grexit does not in any way invalidate any of those reasons.

Now I'll add another reason; it is the only way that Greece will rebuild the Greek economy and get the country back to work. And until the country gets back to work, there will be no future for Greece.

This chart, from the National Party (the ruling party) of New Zealand shows why Greece must leave the Euro, and why it will be a good thing. Look closely at this chart: 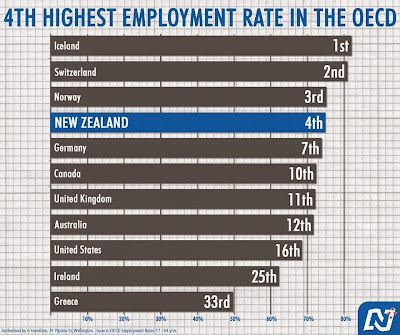 Now what does this tell us? Here are some quick observations:

The road to growth is through a managed bankruptcy and fresh start. People can do this, and so can companies. As for lending to people, in the United Kingdom the FCA (Financial Conduct Authority) requires lenders to ensure that their clients are actually able to repay, and to ensure that the loan will not result in undue hardship. So why didn't those lending to Greece, or to be more accurate, buying Greek bonds and therefore making an affirmative investment, confirm that their investment would be able to be repaid without undue hardship.

A quick reminder of my original 6 reasons:

Number 6 is almost the "General Belgrano" option. If it looks like negotiations will actually happen, thereby stranding your fleet in the middle of a South Atlantic winter, then do something to ensure the other side will not negotiate.

So, having missed the date, instead of fixing another date, I will only predict the following for anyone visiting Greece this summer:


Because let's be real about this, in or out of the Euro, Greece is a fantastic place, and the tourists will flow in, and the wine and olives and other produce will flow out. And with any luck, and Grexit will also begin the process of (re-)creating a vibrant economy that brings the Greek diaspora home.

Oh, and for a final treat - the official Talking P.I.G.S. music video! 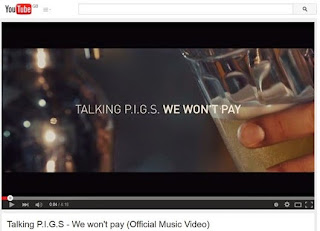 Posted by Daniel Roberts at 10:45 AM 2 comments: Links to this post